First it was, “are you on Facebook?” Then it was, “do you tweet,” and now “did you pin that?” Pin, as in Pinterest, as in the “you think it’s stupid but next thing you know you are pinning everything and getting excited about creating new boards” website. If you don’t know it, Pinterest is a combination of scrapbooking and bookmarking a website. You create a board and then “pin” things to it. You know how when you want to come back to a website, you bookmark it? Now you pin a thumbnail of it and it looks pretty.

Anywho, one of my Pinterest boards is for recipe saving. I always intend to but I’ve never actually made any of the recipes, until, you guessed it, until now! I have been so bored with my eating lately I figured I better shake things up, and so I attempted to make Creamy Avocado Pasta, originally found on the Flourishing Foodie website. In cooking, for me, the more simple the better and this seemed pretty simple –  tomatoes, avocado, olive oil, lemon juice, garlic and pasta. It was simple and it was really good!

I’ll skip right ahead to the end product: 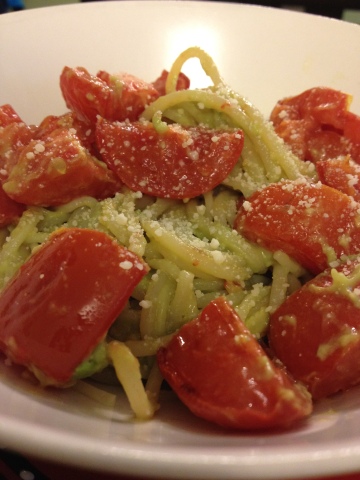 And just for comparison, here’s the original recipe photo on the left and mine on the right: 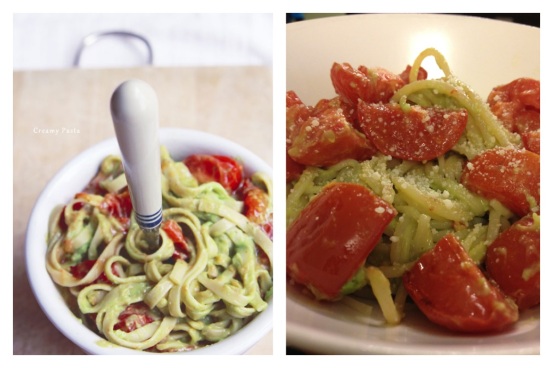 OK, so now the details. (To be honest, I don’t really know how it works doing a recipe review and I don’t want to post anything without permission so I’m not going to post the whole recipe, but you can find it here.

What I would change next time:

In short, this was awesome and I’ll definitely make again, with a few minor changes. But that’s the fun with recipes – taking someone else’s creation and making it your own! Or as I like to call it, letting someone else do all the work and sweeping in for the victory!

And least I forget, because I’m not sure exactly how much pasta I used, it’s a little hard to figure out the Weight Watchers points.  I’m estimating this at 8-10PP per serving. I know that’s vague but I’ll come back and update after I make it again and measure out the pasta. Don’t freak out about the high points. I wouldn’t eat this every day and, other than the pasta, this is healthy eating at it’s best. Avocado and olive oil are fantastically good for you, and if you cut the oil like I plan to do, it will knock one point off.

It's ultimately about a healthier me